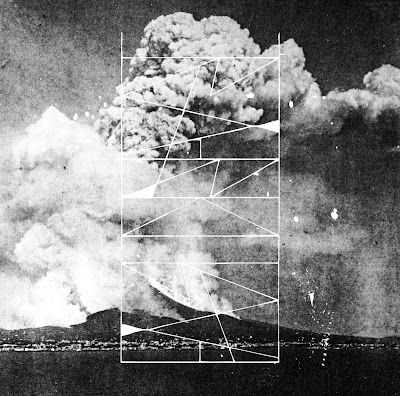 "Blackened earth, void of a once lush planet. Rain falls like mud and burns skin. Bones rattle and slide on shifting graves floating on the surface. The deafening rumble of 10,000 volcanoes. Black skies. All cries have ceased. Eyes melt with ash. A cleansing. For eon we tortured and raped her. Poisoning, suffocating, killing all. Vast machines committing genocide against our mother. She awoke. A last caress. Her molten blood poured from every surface. Choking, melting flesh, burning. Burning. This is the soundtrack to the new dawn. All hail the new dawn of 10,000 volcanoes." - Label description 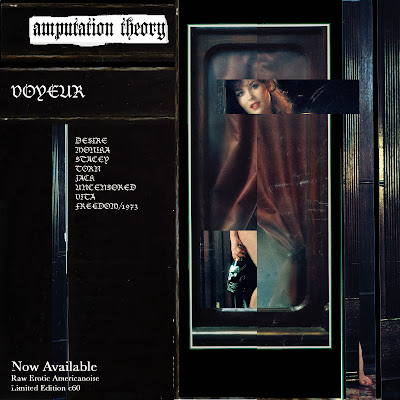 Now Available: HUMAN AS DISEASE - Plague of the Earth / Destroyer -SOLD OUT- 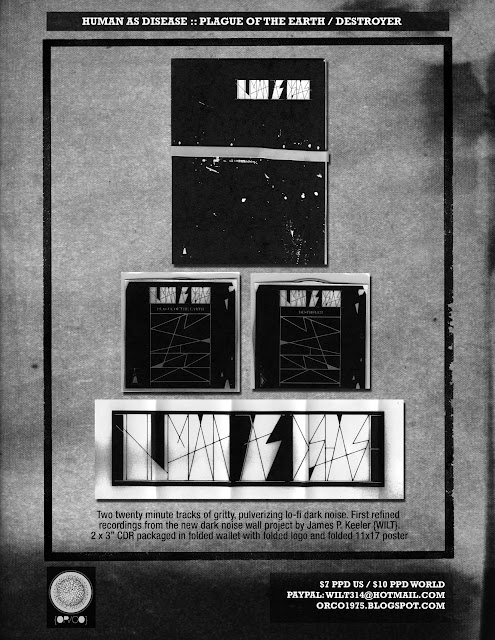 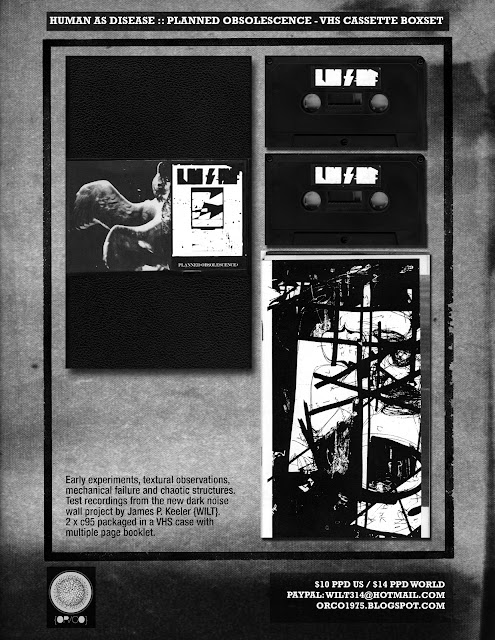 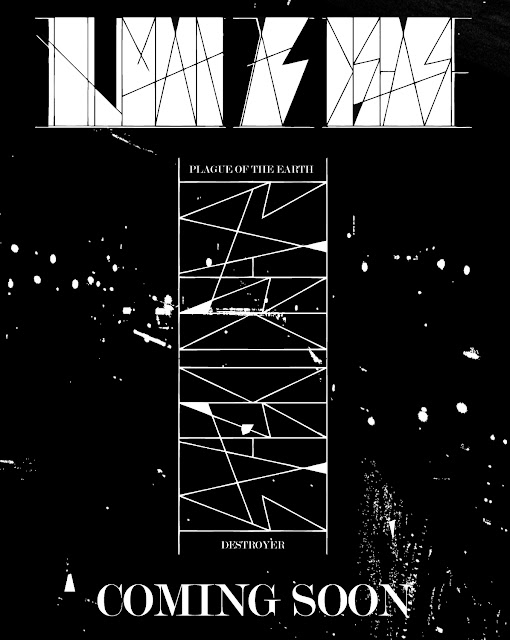 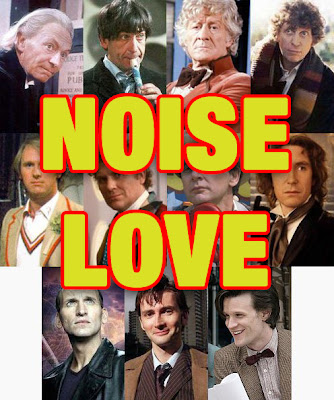 A noise tribute to the greatest science fiction show ever. orco.bandcamp.com 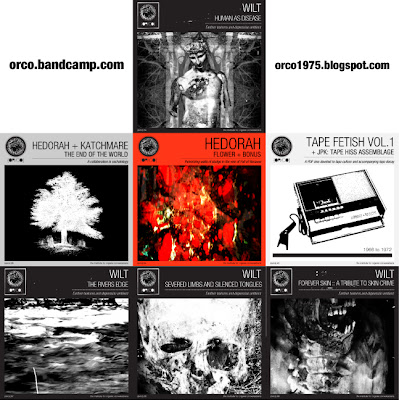 Available now at our bandcamp page are several digital re-issues of old and out-of-print releases and a new release. The Tape Fetish zine downloadable as a 12 page PDF, which includes new magnetic tape manipulations from JPK.

I usually don’t care about artwork. For art that’s built with sound, noise music should probably have absolutely no regard for whatever’s wrapped around a CDr or cassette. But the first thing I noticed about “Obsession” was its imagery. The literal first thing you see when you look at it is this ass. It’s a woman’s ass, to be exact; she’s bent over, complete with a thong, and an 80s hairstyle. The ass is so perfectly positioned to conform to the rule of thirds that your eyes just automatically go to it. Around her ass is a sea of signifiers. There’s a font that looks like it was printed on an early Macintosh computer. Next to the font are lines that should be glowing neon in a strip mall. Some collage eyes and a lamp are next to that half naked chick. On the back of the jewel case, we find the Minotaur logo mixing Coil’s black sun with a buzzsaw. There’s appropriately some bondage porn inside the foldout too. All in all, it’s probably the best artwork I’ve seen in years. It’s beautiful and made me as titillated as I was when I first laid eyes on a GWAR, Misfits, or Marilyn Manson release. And let’s be honest. Those were the highest achievements of rock ever.
I usually don’t give blow-by-blow descriptions of every track on an album. It’s boring for readers, and more importantly, it’s tedious for me to write. However, “Obsession” is a portal into another dimension. If I don’t write you a guidebook, then you’ll be utterly lost. You’ll also lose your mind in the process of listening to it. The album’s opener has some whispers juxtaposed with extremely high-pitched tones. It’s a harsh introduction and pushes the listener away. Don’t be discouraged. The second track sounds like a cover of Bloodminded; it’s short and beeps really fast. It also has some screaming. In contrast, the following “Solider” is longer and surprisingly features beats made from a cheap drum machine. It reminds me of what Prurient’s been making lately in collaboration with Alberich. I’ll talk about the fourth track later. Anyway, the fifth is full of PE and industrial nods. The rhythm has the quality of machinery during peak hours of production. There’s also a fitting line about the “chain of a slave.” The song ends with the equally unnerving observation: “she smells like honey.” Track six, “The Hunger in her Womb,” is just filthy PE. It begins with a low drone that quickly mutates into a pitch shifted and looped synthesizer. It’s immensely similar to track ten, the closer, in that it too follows a simple PE formula. “Blurred by the Violence Pt. 2” interestingly copies the exact same beat on the third song. Yet, the vocals are pitch shifted down to an almost comical slow motion crawl. And it would be comical if it didn’t feel like a serial killer returning to the scene of a crime. It would also be a lot less creepy if the drumbeat didn’t abruptly change into the sound of gunshots. At this point, you begin to realize there’s a narrative emerging about a sexually obsessed murderer. I, unfortunately, had to eerily find out later that the lyrics on “Obsession” were randomly chosen from Anais Nin’s Delta of Venus. If you’re unfamiliar, Delta of Venus is 40s erotica on the subject of abuse, prostitution, and homosexuality as seen from the perspective of a female. Anyway, the eighth track sounds like another Bloodyminded cover. Finally, the second to last track, “The Hunger in her Womb Pt. 2“,” is the most experimental. It finds Minotaur heavily relying upon vocals looped over and over again until they collapse. It is the chain of a slave.
I usually don’t get excited about noise music these days. To say that the genre is dying is an understatement. Lineups that used to pack clubs in major cities are struggling to find basement venues. Bands that used to go on successful national and international tours have disbanded. Worse, the music itself is typically lifeless nowadays. But there’s one exception to be found on Minotaur’s “Obsession.” The fourth track has a brutal rhythm that makes me uncontrollably headbang. The beat was probably put through an 8-bit filter on GarageBand, but it’s effective nonetheless. It’s even more so with the vocals. The track starts off with another pitch shifted microphone. But this time the voice sounds like the narrator on Mortal Kombat who yells fight and does the countdowns – I think it’s Shao Kahn, but I’m not sure. In any case, the combination is lethal and causes one to suspect there’s a deeper, creepier story lurking within “Obsession” – besides Nin’s Delta of Venus. If you happen to be a closeted fan of extreme, dirty power electronics qua Twodeadslutsonegoodfuck, Consumer Electronics, Whitehouse, Yellow Tears, Grunt, Bloodyminded, and Nicole 12, then buy now!
Rating: 4/5
Written by: Pomo Brian
Label (s): Phage Tapes (US) + The Institute for Organic Conversations (US)/ Format: CD / Cat. #: PT:160
Track listing:
1 Blurred by the Violence
2 Lilith was Cold
3 Solider
4 Possession
5 Honey
6 The Hunger in her Womb
7 Blurred by the Violence Pt. 2
8 Her Blood was Fire
9 Possession Pt. 2
10 The Hunger in her Womb Pt. 2
No comments: 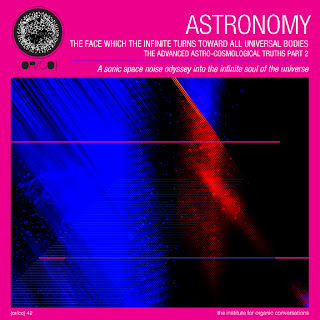 "ASTRONOMY: The Face Which the Infinite Turns Toward All Universal Bodies" is now available through our newly created bandcamp page. Part 2, and the final chapter of the  "Advanced Astro-cosmological Truths", is a much harsher journey as the cosmic code has begun to deeply seep into every ounce of our cosmic being. We begin to fall apart as if every molecule in our body has taken a step away from each other separating us from the material to the immaterial.

I was captivated by Minotaur's Obsession as soon as I set eyes on the cover. On it, a hallucinatory collage of disembodied eyes float around an attractive young woman clad only in a bra and thong, her back to the viewer, casting a beguiling, heavy-lidded glance over her shoulder. This vaguely nightmarish night-scene evolves into something much darker as you open the album and find the high contrast images of intricate rope bondage and fetishistic modeling, juxtaposed with an older glamour shot of an unknown woman. This all ties together with the thematic influence of Anais Nin's 1977 collection Delta Of Venus; this classic piece of literary erotica provides the raw material for the lyrics on Obsession, as well as the seething eroticized energy that oozes across the ten tracks. This is the first full length album from Minotaur, the duo of James Keeler (Wilt, Hedorah) and George Proctor (Mutant Ape, Sump), and it's nowhere near as excruciating as you might think it would be. What these guys have created here is one of the creepiest power electronics albums I've heard, taking scenes of debauched sex, virulent lust, and controlled violence and setting them to a backdrop of pounding metallic rhythms, tumescent black synthesizer drones that feel as if they are eating right through your stereo speakers, and muted noise walls. The electronics are thick, malevolent, oppressive, more musical than pure noise. It's the vocals that really add that extra dose of intoxicating nastiness to Obsessions pervasive haze of black lust, morphing from deep, pitch-shifted mutterings, to heavily-delayed whispers that crawl deep under your skin, to militant barking demanding submission. You could compare this to some of the newer Prurient material as well as the pitch-black electronics of Theologian, but Minotaur's own Philosophie dans le boudoir smolders with a dark carnal violence that is uniquely it's own. A fucking phenomenal album, highly recommended to anyone into forward-thinking power electronics. Limited to two hundred copies. 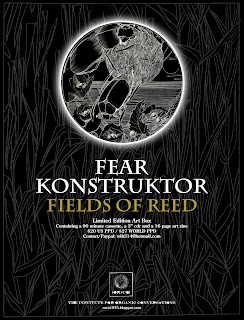